This guide provides information about how sex and gender differences matter in health research. Use this guide to learn more!

Office of Research on Women's Health 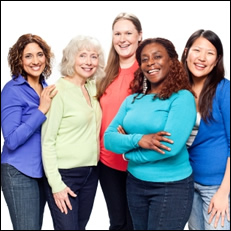 "Researchers are discovering the critical roles that sex (being male or female) and gender identity (a term which includes social and cultural factors) play in health, wellness, and disease progression. The discoveries being made through the study of women’s health and sex differences are key to advancements in personalized medicine for both sexes." (http://orwh.od.nih.gov/about/womenshealthresearch.asp)

The NIH Office of Research on Women's Health has published an Infographic: How Sex and Gender Influence Health and Disease that explains the terms "sex" and "gender" while also illustrating several sex and gender differences between men and women that can have an effect on health. Examples are related to mental health, smoking cessation, cardiovascular risk, osteoporosis and knee arthritis.

Each course contains six lessons and will take about six hours to complete. CME credit may be available for successfully completing each course (more information here: http://sexandgendercourse.od.nih.gov/continuingEducation.aspx)

Try this PubMed search for Sex and Gender Differences Research. Add your search term by using AND at the end.

Get help! Request a consultation