1. Students will learn the basic ideals of information literacy which will frame activities for the rest of the semester.

2. Students will learn one information assessment criteria (PADRE) and show evidence of how to apply them.

3. Students will learn the basics of information/knowledge synthesis and show evidence of application in practice.

How searching the web is different from library research (especially since 2006: trivia question: what happened in 2006 that makes any difference with libraries, anyway?)

First Stop: Library Research: As you find articles that you think are relevant,  1. download the article (get that full text and save it in a shared drive (https://box.utah.edu/) 2. get a small amount of citation information (title, journal, etc.) 3. read the first page or so then write a sentence (or less) about what the article is saying 4. find a quote that agrees with the sentence you wrote Second Stop: Synthesis After you have a list of articles, try to put them into a cohesive order where each article contributes to a greater narrative or point.  This can be helped greatly by a chaotic mind map where you try to tie concepts to each other into a greater whole

What is information literacy?

What is information literacy and how will this class teach me?

It isn't hard to find information these days -but knowing whether it is worthwhile or even trustworthy is a problem, but what about information that's hard to find, or you don't know if it exsits or not?  I'll help with strategies related to that, for sure.

But then how do you actually use it in combination with other sources and your own opinions?  I'll help you understand how to process information in a way that is efficient and confidence inspiring for your future work here at the university. 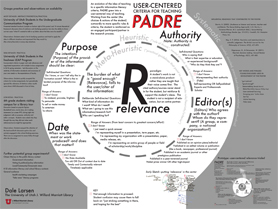 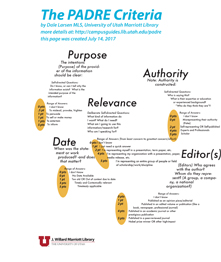 How can you determine the value of any information?  Whether it is verbal, non-verbal, written, yelled, televised, etc., the following information literacy screen can be used to determine value.  Hint: an article is considered scholarly (or "high impact") if it shows strong evidence of passing all five of the following...

P is for Purpose

Why was the information given/published/produced/etc.?  To inform? To persuade? To sell? To entertain? To get you off their back? –there’s no absolute correct answer, but it is very helpful to consider.

A is for Author(ity)

Who is the author(s) and how are they an authority?  Example: Stephen Hawking has a PhD in Physics and holds the Chair of the Physics Department at Cambridge University –if he states something related to Physics, he is highly authoritative.  If he argues with you that the most important element of cheesecake is the crust –he is on equal authoritative footing with the rest of us cheesecake fans.  Note: years of specific experience also counts, but is less easy to quantify than a degree or title.  Being old or being a celebrity do not count in and of themselves.  An item with ‘anonymous’, a ‘wise man once said’, no listed author, or a record of a changed authorship, are all poor.

D is for Date

How fresh is your information, and does that matter?  If you’re looking at anthropology, a field report from a dig along the river Euphrates in 1915 may be just as valuable as today.  If you are looking for smart phone reviews, you’ll want something more recent.  If there is no date of publication –then beware.

R is for Relevance

What level of information do you need?  You won’t need a scholarly article to pick a restaurant to go to, but a foreign policy specialist would be ill-advised to base policy decisions on the ideas of the guy at the grocery store putting in his 2 cents (but he probably is a great reference for the nearest & best coffee shop!)

E is for Editor

All information has added value when a larger group agrees with you and says so by publishing you (essentially you have successfully passed the editors’ desks).  Example; if someone says that all chicken should be eaten raw (which we all know is a bad idea, you would get horribly sick, and it would be disgusting, right?):
in a self-published blog = it is either a prank/satire, or they are crazy
in a local news source that will publish anything = it may still be a prank, or something that slipped by the overworked editor by mistake
in the New York Times = it might be part of a hard to understand movement; you won’t catch me eating it, but at least I can read about why someone is.
in the Journal of the American Medical Association = either all doctors are crazy
or there’s some bizarre, but effective treatment of a disease.

Authoritative Sources for Trends and Ideas
great for getting the creative juices going, but aren't necessarily considered scholarly 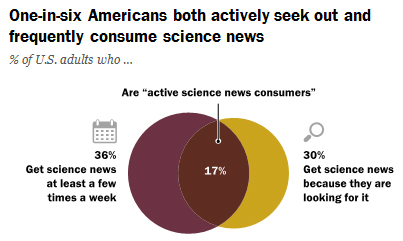 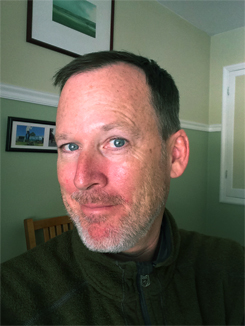 I love to help with your research: from just seeing the assignment, to wrapping up with citation management -drop me a line or come by 1726C on the first floor of the Marriott Library

OFFICE HOURS
Send me an e-mail -I'd love to hear from you!
Subjects:Communication, LEAP, Social Sciences, Social Work, Sociology

Egregiously noisy video of the week

In 1969, the great Soichiro Honda hand crafted this six-cylinder 250cc screamer, the RC 166.  Top speed 150ish mph, puts out over 60 bhp -that's double of what a new fuel-injected 250 Ninja/Kawasaki puts out today -although they undoubtedly last longer and are much cheaper to buy.

What questions can I ask a librarian -here's some starting points:

I need help figuring out the assignment

How do I do a literature review?

Can you help me find something more clearly stated?

What is ok to use for this assignment?

Can you help me use this scholarly article?

How can I make connections between all the web and library sources?

How do I make sense of all the research?

How can I find what’s important on this topic?

What has the greatest impact in the last five years on this topc?

What does this citation mean?

What journal does my instructor want us to use?

Is this good enough for my paper?

How can I possibly understand this topic?

Did I cover the topic with what I found?